Neurovision disorders are becoming more prominent and the number of misdiagnoses is alarming. Thank you to our local media for helping us educate the public and provide help.

Dr. Kathryn Collins, optometrist and founder of Kissel Eye Care in Lititz, Columbia Eye Care in Columbia, and Neurovision Rehab Center in Lititz has been recognized as one of only 12 certified neuro-vision specialists in the United States. Neurovision is the science of helping patients who have suffered or are suffering from headaches, dizziness, double vision, unsteady walking, difficulty reading and "brain fog."

"Neurovision is a developing medical special-ty that is getting more attention now than ever," says Collins. "Because of the occurrence of concussions and the attention to CTE in professional, college and high school athletics, and the military, neuro-vision rehabilitation is becoming more prominent and I feel the need for this service is growing. As more family doctors, neurologists, physical and occupational therapists are learning about this specialized care to treat post-concussion, more of their patients are getting better sooner." Collins studied neuro-vision with Dr. Debby Feinberg at Vision Specialists of Michigan to provide neuro-vision therapy, including the ability to recognize, diagnose, and treat of vertical heterophoria, superior oblique palsy, and post-concussion symptoms.

She grew up with brothers who wrestled. She has a daughter who's into running, and she enjoys a college football just like so many of us. So in no way can she be labeled "anti-sports". Instead, Dr. Kathryn Collins considers herself to be "pro-patient", to borrow her term. Which is why she is happy to share her thoughts about concussions and young athletes.

"I think there's a lot more that needs to be done, especially (in) the sports that aren't necessarily getting all the attention", she said in a recent interview at her Lititz office. "There have to be better ways to protect kids and get them to help they need".

Collins of Kissel Eyecare can speak from a distinct vantage point. During her 19 years of practice in Lancaster County, she has become one of only 12 optometrists in the U.S. who has certified in neuro-vision therapy. She sees patients from as far away as California and Florida, as well as in the Middle Atlantic region.

She estimates that half of her patients have suffered concussions and half of those are sports-related injuries. Her theory is that concussions aren't necessarily increasing, but awareness of them is.  "I think schools and coaches are more capable of diagnosing and recognizing concussions," she said. "And also there's a little bit of fear there, where they're afraid to put a kid back in. In the past, it was, "Shake it off"." Still, Collins wouldn't mind seeing more of those diagnostic skills and that fear at the scholastic levels.  She also makes it clear that the problem reaches well beyond football, around which the drums are beating loudest and longest.

According to the recent Center for Disease Control and Prevention report, football players suffer 47 percent of sport-related concussions. The next two sports on that list are girls soccer and girls basketball respectively. Collins says she has seen "many, many" concussions in cheerleading. She also mentions girls soccer, swimming, and even fencing. Yet while football programs have taken steps to address the issue, other sports may not be keeping pace.

Neither parents nor the athletes themselves are without responsibility here. For example, Collins notes that schools have adapted preseason testing to use as a baseline later when an athlete is injured. But it's not uncommon for kids to deliberately score low in the preseason, thinking it will help them make a quick return to action if they are hurt. "A lot of times, kids their parents don't recognize (a concussion)," she said. "They may not even have been diagnosed with it. Then it's, "Oh you're fine, it didn't show up on an MRI or a CAT scan." But it doesn't show up on an MRI or CAT scan. Then (kids) go back to school and realize they don't feel so good."

Collins says 70 percent of the brain is linked to sight, including the eyes' ability to function in sync. And by now it's no secret that concussions can lead to more concussions. She says first concussions make someone four times more likely for a second, and a second makes him eight times more likely for a third. Against this back-drop, Collins wants to "get the word out" and work with more local schools. She hopes they will continue to build on the efforts made in football, perhaps becoming more proactive.

"I certainly think there are ways to protect yourself, and that is where the technology is going to go forward," she said. "To protect kids and help them get care sooner when it's needed." You might call it simply a question of focus. 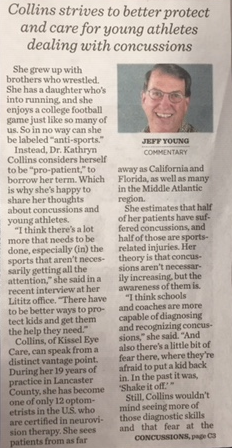 Dr. Collins on A Battle Within Podcast